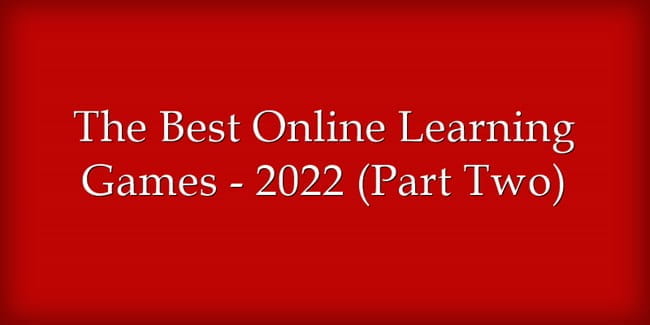 It continues to be time for end-of-year “Best” lists.

You can see all my previous Online Learning Games “Best” lists (and there are a lot since I’ve doing this since 2007) here. Note that they’re also continually revised and updated.

Here are my picks from the second part of 2022:

Cranky Uncle is a not-very-splashy, but effective, information literacy game that you can play in a browser or download as an app. Players learn various common strategies that can be used to manipulate consumers of news. I’m adding it to The Best Tools & Lessons For Teaching Information Literacy – Help Me Find More.

Geo Artwork is a game from Google where you have figure out where a shown piece of art is located. I’m adding it to The Best Online Geography Games.

Here’s a repository of all the different Wordle versions from around the world.  I’m adding it to THE BEST RESOURCES FOR USING WORDLE IN THE CLASSROOM.

Google unveiled an online video called called The Descent of the Serpent. Here’s how they describe it:

The game involves retrieving the lost objects and returning them to Chichen Itza in time for the solar equinox. That’s when the sun casts a shadow on the carvings in a way that resembles a snake descending the monument’s steps — which inspires the game’s name. As part of the challenge, players are invited to learn surprising, impressive and interesting aspects about ancient Mesoamerican cultures, and face mythological figures who’ll test the knowledge they’ve collected throughout the adventure.

I’m adding it to The Best Resources For Learning About The Maya.

Two Ways to Make Your Own Wordle-style Games is from Richard Byrne. I’m adding it to THE BEST RESOURCES FOR USING WORDLE IN THE CLASSROOM.

If you search Quizizz on my blog, you’ll see tons of posts praising it and its near constant stream of improvements. They’ve just added even more question-types, and are projecting others (I’m particularly excited about “drag & drop.” They’ve created a special game anyone can play highlighting all the different types. I’ve been having peer tutors create Quizizz games for my English Language Learner History and English classes, so these new question-types will be great additions!

Bloom is an online stock market game.  I’m adding it to THE BEST RESOURCES FOR TEACHING & LEARNING ABOUT HOW THE STOCK MARKET WORKS.

For years, Quizalize has been a learning quiz site like Kahoot and Quizizz, but one without many of those other two sites’ features and with far fewer pre-made games that teachers could choose from. However, they recently announced that later this month they are transforming themselves by adding Quizalize Games, which will enable teachers to turn those quizzes into creative games that, though they will be different, I think can be compared to the kind you’d find on Blooket and Gimkit. You can read their announcement here and learn more here. I’m adding this info to The Best Websites For Creating Online Learning Games and to The Best Online Games Students Can Play In Private Virtual “Rooms”

Kahoot is trying to catch-up with Blooket, Gimkit and others by adding adventure-type games to its site, though you have to pay extra for them.

You can do a lot of things with Vevox, and it looks like they recently added some features to include the ability to be like Kahoot and Quizizz. Because it has so many other features, it’s a little more complicated than those game-only sites to use and, unlike the other game sites, it doesn’t have many other games that others have created – so you really do have to create your own. But it could be useful just as a change-of-pace for students.

A LOOK BACK: 13 SOURCES OF SIMULATION GAMES & INTERACTIVES

This is pretty “niche,” but interesting: A choose your own adventure game where you play the role of someone trying to found a tech start-up business. I’m adding it to The Best Places To Read & Write “Choose Your Own Adventure” Stories.

I’ve previously posted about Splash Learn as a good site for math games for younger students.  I recently learned from Richard Byrne that they have since expanded to including English games, as well.