What boundaries do you have for media consumption in your life? We’ve heard a lot about “screen time” in the past few years, as both Apple and Google / Android have added built-in tools for tracking screentime. But what comprises your “media consumption” or “media diet” within your weekly screentime? The channels you watch and follow on YouTube, the Netflix seasons you watch, and the movies you choose to watch (or not watch) on other streaming platforms or at an in-person movie theater are part of your media diet. We all need media consumption boundaries, and always have. Yet we have fewer boundaries between us and media than ever before in human history, thanks to the confluence of technologies which continue to mature and evolve. This expanded access to media, VOICES and perspectives is a two-edged sword. It can be wonderful and positively transformative, but it can also be harmful and destructive. In this post, I’d like to reflect on “media consumption boundaries” and why we need to have conversations about them in our families and classrooms.

Like millions of other fans around the world, I was excited for the release of “Stranger Things Volume 4” two days ago, on Friday, May 27th. I was a bit surprised at the opening “warning card” message for Episode 1, however, which reads:

“We filmed this season of ‘Stranger Things’ a year ago. But given the recent tragic shooting at a school in Texas, viewers may find the opening scene of episode 1 distressing,”

Even without considering the horror of the school shooting in Uvalde, Texas, on May 24, 2022, the opening scene of Stranger Things Season 4, Episode 1 (“The Hellfire Club”) is gruesome and difficult to watch. Even though (as audience members at this point) we know Jane Hopper eventually becomes “a good person” in her series character arc, how many people really want to watch a realistically depicted mass-murder of both children and adults? Hopefully that number is small.

That first episode of season 4, episode 1 ends with likely the most horrific, demonic murder of a human being I’ve seen on a television or on any screen. No, I’m definitely NOT a fan of horror films. But I didn’t think the “Stranger Things” Netflix series belonged in the cinematic genre of “horror.” Yet given the facts of both the opening and closing scenes of this episode, I think it should be. Yet there is more bad news to consider here.

I stopped watching the series (forever, I’m afraid) in the initial scenes of episode 2, when the police officer hero (Jim Hopper) is being tortured by Russian agents in a Siberian prison. As a military veteran myself as well as student of the fate of our POW/MIA servicemen in Southeast Asia, I have very strong feelings about the United Nations Convention against torture. I do not support the torture of human beings, I do not support political candidates who support torture, and I do not want to watch simulated torture in a movie or on a screen of any type / size.

I am extremely disappointed the writers and producers of “The Stranger Things” series chose to develop such dark and unnecessarily horrific plot lines in season 4. I will likely remain a fan of Stranger Things Seasons 1, 2 and 3, but count me OUT for season 4. I do not recommend Stranger Things – Season 4 to anyone, based on my approximately 1.5 hours of total watchtime. If you enjoy gruesome horror films, you may like it. But for your own mental health and wellness, I encourage you to skip it and find something else to watch and enjoy.

We live in a “seek and find world” of media, thanks to the growing popularity of the Internet’s World Wide Web and the proclivity of human beings to share both good and evil things with each other. See my January 2020 post, “Thoughts on Content Filtering, Parent Education, and School Laptop Initiatives,” for more on this. By “seek and find world,” I mean that if someone has access to the Internet and is persistent in seeking “inappropriate content,” they can (and sometimes readily do) find media which is arguably unfit for anyone to consume, and may even be illegal in many countries. I’m not saying that the scenes from Stranger Things Season 4, episodes 1 and 2 are illegal in the United States. I AM saying that our fractured and often confusing media landscape today presents us as parents, teachers, and citizens with more challenges than ever before.

In the case I’ve described here, I was NOT seeking / trying to watch scenes of a mass murder or grotesquely explicit demonic murder. Yet I saw both of these things, watching “another season” of a Netflix series I’d watched and enjoyed in the past. So this situation is less an issue of inappropriate “seek and find” content, as it is a case of media content which is “much worse than I ever imagined it would be.” Maybe there is a more concise or eloquent way to say this, but that’s the best I can do today.

This reminds me of several things. First is Robert H. Bork’s 1996 book, “Slouching Towards Gomorrah: Modern Liberalism and American Decline.” It’s been awhile since I read it, and I’m not saying today I agree with all his ideas and points, but the overall theme of the book still strikes me as compelling and accurate. Some of these ideas are reflected in Jonathan Haidt’s April 2022 article for The Atlantic, “Why the Past 10 Years of American Life Have Been Uniquely Stupid.” It’s an article with ideas so important and challenging, I’ve been working on a rough outline for a blog post dedicated to it specifically. I’ll summarize those perspectives which are relevant to my thesis in this post by observing that the combination of “modern liberalism” with the content moderation challenges of social media (what we called “web 2.0” or “the read/write web” in the mid-1990s) have brought us to an era of blurred boundaries and fewer restraints when it comes to shared media content.

This brings me to another story. I thought I’d written a blog post about this at the time, but if I did, I can’t find it now. In October 2011, I flew internationally on “first class” for the first time ever from Houston to Doha, Qatar, to speak at a middle school education conference. The in-flight entertainment system at the time on Qatar Airways was top notch, but it caused me a considerable bit of cognitive dissonance. On the one hand, I could choose to listen to the Quran in Arabic. 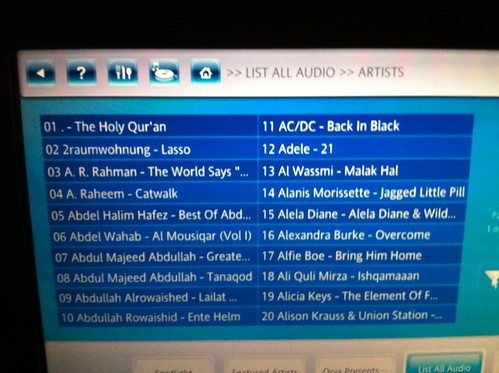 On the other hand, and at an opposite extreme of conservative versus liberal media content, I could opt to listen to Lady Gaga’s latest album (at the time) “Born This Way,” which features a cover that looks fairly demonic. (I actually do like Lady Gaga as an artist and some of the songs on that album, but I could also offer a lengthy deconstruction of many of her lyrical themes from several different philosophical perspectives.) 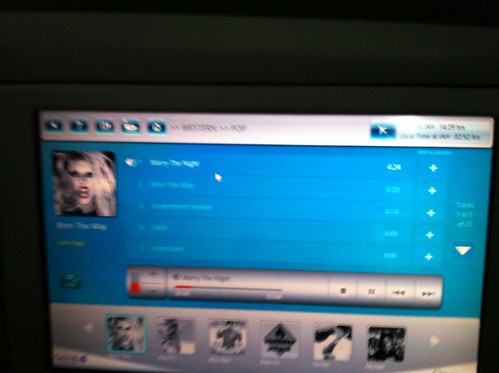 “Lady Gaga on Qatar Airlines” (CC BY 2.0) by Wesley Fryer

Eleven years later, that experience on Qatar Airlines with the aircraft’s built-in entertainment system options still sticks with me. What choices we have today when it comes to media content consumption! And those choices are even more extensive and potentially contrasting today in 2022 online.

I’ll close this post with another, more recent story which highlights the “seek and find world” challenges I mentioned earlier. The last week of school, as I walked back to our middle school building from our morning chapel service, I overheard one of our fifth graders offering some counsel to a classmate. He asked if his friend had ever heard of “Name XYZ,” and explained that it’s a mildly inappropriate YouTube channel his parents don’t want him to watch, but he liked and recommended. In some cases, especially since many students do not have any type of parental control settings or software installed on their personal smartphones, simply a suggestion to “Google THIS” can lead a young person down a potential rabbit hole of inappropriate and unhealthy media content as well as ideas. This overheard 5th grade conversation last week is a “sign of the times” that conversations about media consumption boundaries are needed today.

Fewer “natural barriers” exist between anyone connected to the Internet and media content which would, in previous generations, have been entirely inaccessible or MUCH more difficult to access. Even when you are NOT seeking “rated MA” or “rated R” media content, it’s possible to encounter it online and in streaming media. It’s a worthwhile question to ask of ourselves, our spouse / significant other, our children, and our students: What are your personal boundaries for media consumption? Is this something you’ve thought about much? Where do you draw the line, and why do you draw that line? If you don’t draw a line, or you draw a line that is much less restrictive than ones drawn by others, are there consequences for that decision? What are they?

I think these questions and this discussion would make an excellent “Parent University” workshop or webinar, or topic for an adult Sunday School class. It could also be a great topic for a conference breakout session or a half-day of teacher professional development. 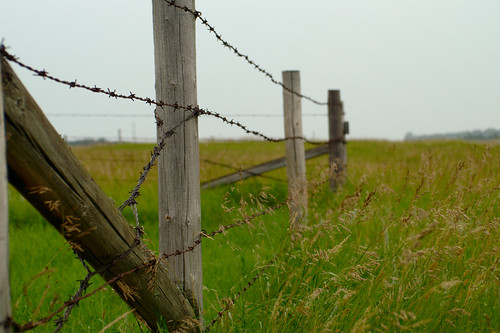 I am comfortable to contend we all need media consumption boundaries today. Those boundaries are going to look different depending on many factors, but they are still needed. That is a subject worth more consideration and discussion. 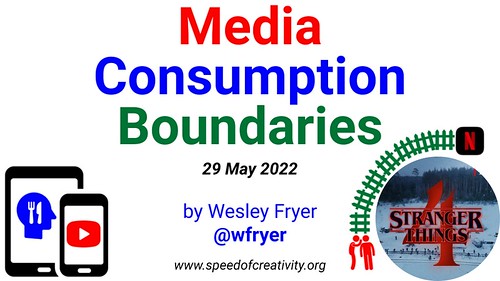 If you enjoyed this post and found it useful, subscribe to Wes’ free newsletter. Check out Wes’ video tutorial library, “Playing with Media.” Information about more ways to learn with Dr. Wesley Fryer are available on wesfryer.com/after.